Read about Moore’s current plans for the fall 2020 semester and summer academic programs. Visit moore.edu/coronavirus for the latest news and our FAQ. 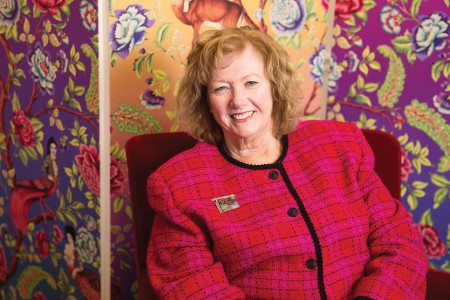 Cecelia Fitzgibbon assumed the office of president in July 2012.  President Fitzgibbon serves as executive editor of The Journal of Arts Management, Law and Society. She has been a speaker nationally and internationally on topics of leadership in the arts and cultural policy. She was the lead researcher for the Philadelphia component of the National and Local Profiles of Cultural Support Project, a collaborative project with the Greater Philadelphia Cultural Alliance that investigated how the nonprofit cultural industry was supported in ten communities across the United States.  From 1996 to 2012 she served as the Director of the Graduate Arts Administration program at Drexel University, achieving the rank of Full Professor.  She also served as the Chair of the newly formed Department of Arts and Enterprise from 2010-2012 and prior to that as Chair of the Department of Performing Arts from 2001-2010.

She was the founding project manager for the Pennsylvania Cultural Data Project (now the Cultural Data Project), at the time a collaborative effort of the Pew Charitable Trusts, the William Penn Foundation, the Heinz Foundation and the Pennsylvania Council on the Arts. Together with key leaders of the Pew Culture Program, she also conceptualized the original guidelines for the Philadelphia Cultural Management Initiative, a capacity-building program for professional arts organizations in the region currently housed at the Pew Center for Arts and Heritage.

President Fitzgibbon served as executive director of First Night Wilmington from 1995 to 1996. Prior to that, she was senior vice president of ArtsMarket Consulting, Inc., where she conducted program planning and evaluation for clients including the Rochester Area Foundation, Southern Arts Federation, Georgia Council on the Arts, Mississippi Art Museum, New Stage Theater, West Virginia Department of Cultural Affairs, New York State Association of Museums and the Guggenheim Museum Learning Through Art Program.

From 1993 to 1994, President Fitzgibbon directed policy planning, program design, fund raising, communications and organizational development as executive director of the New England Foundation for the Arts (NEFA). In this capacity, she instituted the region's cultural facility fund, a technical assistance program and loan fund for the development of arts facilities, and inaugurated the first year of the New England Artists Trust.

President Fitzgibbon also spent eight years as director of the Delaware Division of the Arts, where she led the concept, design, and implementation of a $21.5 million arts stabilization project; the creation of the state's first economic impact study model; the development of a nationally recognized dance residency program; the evaluation and design of highly-acclaimed arts in education programs; the establishment of an arts standards and assessment commission; and the institution of the agency's first strategic planning process.

President Fitzgibbon earned a BS from the University of Massachusetts in Landscape Architecture and Regional Planning and an MA in Arts Administration from New York University.  She is married to artist Scott Cameron and has two sons, Stuart Cameron who is an MBA candidate at the Darden School of Business at the University of Virginia and Ross Cameron who is a graduate of Bard College and a Program Assistant at Design Philadelphia of the Center for Architecture.